Hayfield girls (ages 9-11) met High Lane as both sides competed in their first match on Sunday the 12th of May. The game was played in front of a large crowd in excess of 50 including ‘Deano the Deer’ the High Lane mascot.

High lane playing in purple started the match and took the lead 5 minutes into the first period when the defence marshalled by Maya Lancaster, Audrey Nicholson and Hannah Dunn was beaten. Hayfield equalised immediately from the restart when Amelia Bates and Holly Wilde combined down the left before the ball was crossed for Ella Stewart to equalise with a powerful shot from close range. Shortly after the restart Hayfield took the lead when Gemma Bowers weaved through and dispatched the ball into the bottom left hand corner.

Hayfield replaced six players for the second period and increased their lead to 4-1 within five minutes. The attacking trio of Millie Whitlow, Freya Bates and Charlotte Peacock pressured High Lane allowing Gemma Bowers to score. A minute later Gemma completed her hat-trick with the goal of the game. The goalkeeper’s clearance was dispatched back into the top right hand corner from 18 yards. High Lane scored next when the solid defence of Emily Turnbull and Madison Bowers was finally breached allowing High Lane a clear shot on Caitlin Lever's goal. Charlotte Peacock restored the three goal lead by dribbling past several players before placing the ball across the keeper into the bottom right corner.

During the third and final 20 minute period each of Hayfield's players was given another ten minutes to play in a different position. Both sides scored again, Hayfield's goal coming from midfield maestro Gemma Bowers.
The standard of football played by the 20 High Lane and 13 Hayfield players in their debut game was exceptional. Both sides kept a solid formation throughout.

The game was refereed by High Lane's coach, Dave Aitken.

Congratulations to our Under 11s team and their coaches Steve Oxley and Paul Cooper. The team have won this year's Stockport Metro League fair play award. 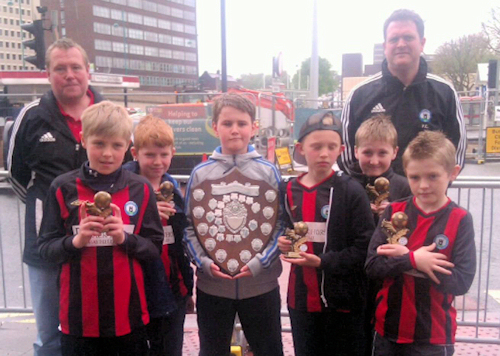