This weekend we did the FA Soccerstar Challenge. Well actually we had a bit of a practice at it for when we do it for real in a few weeks time.

There are six tests, you can see animations of each of them from the links below.

Practice these because in a few weeks time we'll do the challenge again and will have offical FA certificates for everyone who takes part and prizes for the best and most improved.

The U8s is a return match against High Lane. This time it's at home - so that will be our first ever home game! It's on a Saturday morning, the 16th May with kick-off at 10:30am.

The U10s game is also against High Lane. It's a midweek away game on Thursday, 21st May. More details to follow.

You may have seen us in the Buxton Advertiser this week. There's a good picture of the U8s. Definately one for the scrapbook so get yourself down to the newsagents!

If you run a junior team in the High Peak or Stockport areas and want to play a U10 or a U8 friendly then please, please, please get in touch. We're desperate to get some more games under our belt before the summer and would love to meet the competition before we start our first season in September!

This week we'll be having a go at Rainbow Kicks. You'll need to practice this to get it right. When you can do it from a standing start try doing it when you're runing with the ball.

Run Off That Chocolate This Sunday

We're back at the Field of Dreams this Sunday. Actually Bog of Dreams would be more appropriate. Make sure you've got your boots as it's still slippy. See you there!
Posted by Carl at 11:42 No comments:

This was Hayfield Junior's first game quickly followed by their second. It seemed that half of the village made the journey to High Lane for this much anticipated fixture.

The match got of to a great start with keeper and captain Lewis Chadwick winning the toss and electing to kick-off. A nervy start followed with Hayfield's players finding their feet against a well organised High Lane.

The deadlock was broken after five minutes with a stunning left foot strike across the face of goal into the top right corner by Michael Deaville.

A spell of pressure from Hayfield followed but on the ten minute mark High Lane broke from defence to charge up field through the heart of Hayfield's defence and drew level.

The second half kicked off and following a couple of runs at goal, the hard working Josh Harwood got his reward tucking Hayfield's second under the High Lane keeper.

The next 7 or eight minutes saw some end to end stuff with High Lane's players, their quick footed captain in particular, breaking in dangerous formation. Hayfield's defensive pairing of Isaac Young and Ben Dean coped aimiably.

The game was sealed with a late brace from the always dangerous Luke Adderley. Luke's sheer determination and skillful control of the ball making life difficult for the High Lane back line.

An altogether different game this one. The game started well for Hayfield with Luke Adderley winning an early penalty. However, Luke was only able to smash the ball against the post where it rebounded into the hands of the grateful High Lane keeper.

This seemed to knock the wind out of Hayfield and sustained pressure from High Lane meant they went in front on 6 minutes.

High Lane kept the pressure up but good work from midfield dynamo Charlie Craig and some stout defending from Callum Gerrard and Joe Brooks kept the defecit to just one goal.

On the stroke of half time, Luke Adderly scored his third of the day after a goalmouth scramble.

Hayfield started the second half looking tired. Lewis "the cat" Chadwick made a string of fine saves to keep High Lane at bay. The pressure was mounting and Hayfield were struggling.

High Lane continued to dominate possession breaking into Hayfield's box in numbers. Hayfield were stretched and only some last gasp tackling from Ben Dean and some great running back from Joe Brooks and Isaac Young kept Hayfield in the game.

A hard fought draw, one that was applauded rapturously by the appreciative crowd.

We got our new kit this week and before anybody had a chance to get it dirty in our first game we took this team photo... 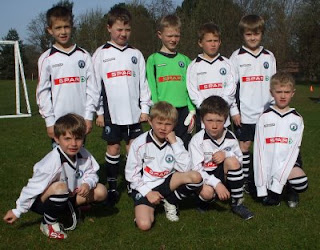 We don't like players who dive. However, they do make us laugh sometimes...

And he was offside!

We've decided that we'd like a Sunday morning lie-in for the first time since July last year so there'll be no training on Easter Sunday, 12th April.

Training will start again on Sunday 19th April where we'll be expecting a bit more effort so you can run-off all that chocolate!

Our first game is this Sunday, 5th April, against High Lane FC's Under 8's

Here's a map on Google

Football training will still be on for the over 8's. Remember we're back on the grass now so bring your boots

A note for parents

We would ask all parents, whether they turn up for training sessions or for matches (when they eventually happen) to observe the following sideline rules when watching your child play:

Please do not embarrass yourself, your child or the club by engaging in any of the above behaviour. Remember, even though football is a passionate game, to the children this is supposed to be nothing more than fun and enjoyment.

By all means engage in positive, but controlled encouragement such as "Well done Billy", "Great pass Jane", "Good effort, Johnny."

About Our Club Badge

At the beginning of the year we had a competition to design a club logo and also to come up with a nickname for the club. The winner of the logo competition was Matthew Deaville. You can see his logo here.

Matthew based his design on the primary school's badge which all of the children in the village are very familiar with.

We had a number of entries for a nickname, including The Pikees, which is appropriate given that we play at the foot of Lantern Pike. However, we chose The Trespassers which reflects Hayfield's important role in establishing the country's first national park - The Peak District National Park.

The nickname was the idea of Callum Gerrard (with some help from his mum!), so well done Callum!

More information on the Mass Trespass of Kinder Scout

Welcome to the first season for Hayfield Junior Football Club.

This season we will endeavour to fulfil the club's aims and objectives by providing a positive learning environment where your child's football skills and knowledge of the game will develop. As well as this we want to try and establish a junior football team representing Hayfield for the 2009/2010 season.

We don't know yet which age group this team will be. With a good number of children we may even be able to achieve two teams. Let's hope so.

Regardless of whether or not we have a team representing Hayfield next year our real definition of success is for your child to want to keep coming to training week after week. This will occur, not through a focus on winning, but through: