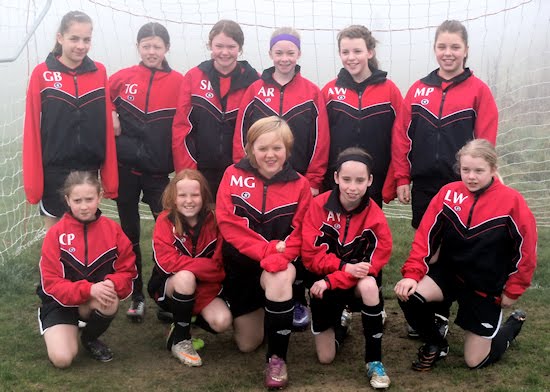 Hayfield won the North Derbyshire Girls Under 12 Cup final with a hard fought 2-0 victory over a very spirited and determined Wirksworth side.

Hayfield started the brighter forcing 3 corners in the first 5 minutes with Amy Vandermotten having a shot tipped over by the Wirksworth keeper. The game became more even and play flowed from end to end on a difficult hard bouncy surface making ball control difficult. Hayfield took the lead when an Alice Rayson throw-in found twin sister Sophie who beat the keeper to a 50:50 ball before firing home.

The turning point of the game came when Wirksworth were awarded a penalty which saw Maisie Goddard save a full blooded shot and then beat away the re-bound before the ball was scrambled away.

The second half was a tense affair but the game was settled when once again from an Alice Rayson throw-in Maya Lancaster back-flicked the ball home past a static Wirksworth defence (a la Gianfranco Zola).

Solid performances at the back from Telesha Griffiths and Sophie Rayson in front of Lydia Waterhouse helped by midfield players Georgia Bull, Annabelle Wilde and Megan Pritchard ensured Hayfield held on to win the Cup 2-0.

In their first season, manager Paul Vandermootten has assembled a side who have delivered silverware.