Hayfield started their 2013-14 season in the South Manchester Girls Football League and soon found themselves a goal down to last season champions Alti Chicks.

After a strong run and cross from the right wing was converted at the far post. Hayfield seemed nervous in the early stages and struggled to put passes together. A half time team talk saw a change in fortunes and straight from the break Alice Rayson was foiled by the keeper when in a one on one situation and Amy Vandermotten shooting just wide from a free-kick. A poor clearance from the Chicks keeper saw Katy Brookes advance goalwards, holding off the centre-half, before equalising with a low shot into the corner of the net.

Hayfield stepped up the pace and from a Megan Pritchard throw-in, Georgia Bull cut in from the right before hitting a 25 yard left-foot shoot past a bemused keeper.

It was then the Chicks turn to pressure in search of an equaliser but centre-backs Martha Kelly and Mel Kennedy held firm along with full-backs Martine Grocott and Quinn Arris-Sutton whilst new keeper Frankie Hodges cleared everything thrown at her.

A 2-1 win was most welcomed and signalled the standard of football Hayfield will meet this season. 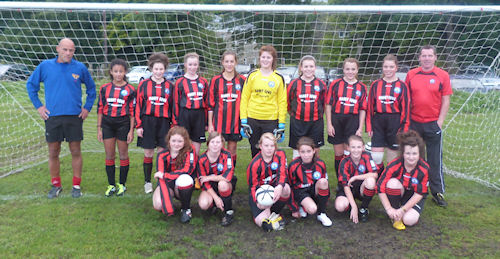